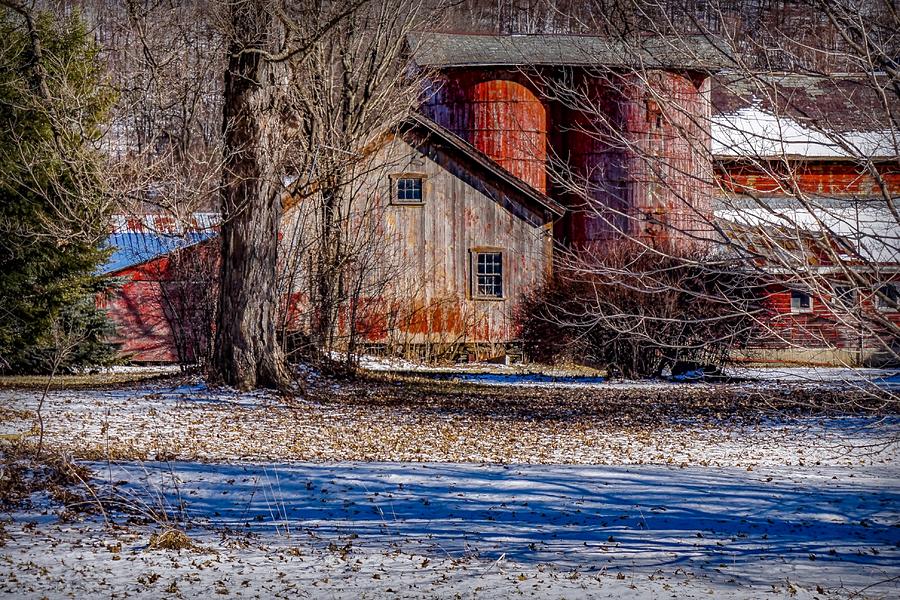 "The image of a quaint red barn against green grass is as American as apple pie, but where does the tradition come from? Although there are many myths about their rusty hue, early-day barns were painted red out of convenience and frugality...

...barns weren't originally red in fact, they weren't painted at all. The early farmers that settled in New England didn't have much extra money to spend on paint , so most of their barns remained unpainted. By the late 1700s, farmers looking to shield their barns' wood from the elements began experimenting with ways to make their own protective paint.

A recipe consisting of skimmed milk, lime and red iron oxide created a rusty-colored mixture that became popular among farmers because it was cheap to make and lasted for years. Farmers were able to easily obtain iron oxide the compound that lends natural red clay its coppery color from soil. Linseed oil derived from flax plants was also used to seal bare wood against rotting, and it stained the wood a dark coral hue.

Farmers also noticed that painting their barns with the homemade paint kept the buildings warmer during the wintertime, since the darker color absorbs the sun's rays more than plain, tan wood. So red paint spread in popularity due to its functionality and convenience, becoming an American tradition that continues to this day."

Congratulations!! This beautiful image has been selected to be featured for the week in the “New England Photographers Photographing New England” Group Home Page. You are welcome to add a preview of this featured image to the group’s discussion post titled “2018 March Featured Images” for a permanent display within the group, to share this achievement with others. Thank you for your participation in the group! ~Jan